The treatments listed below were applied to 5’ x 10’ plots located at the University of Florida Plant Science Research and Education Unit Located in Citra, FL beginning July 27, 2015. Plots were located on a stand of ‘Princess 77’ bermudagrass (Cynodon dactylon x C. transvaalensis) that was established on a native fine sand and maintained under conditions similar to those found on a fairway or athletic field. Each treatment was replicated four times in a randomized compete block experimental design.

Each of the following treatments were applied at a rate of 2 lb N/1000 sq ft, unless otherwise noted:

*For treatments 2, 3, and 4, additional Potassium and Phosphorous was added in order to standardize fertility program against treatment 5.

Turfgrass visual quality ratings were taken every other week throughout the duration of the study using a 1-9 scale where 1 = worst; 9 = best; 6 = minimally acceptable) (Figure 1). Digital image analysis was performed on digital pictures taken every two weeks of each plot throughout the duration of the study. Images were analyzed using SigmaScan Software through the use of a macro titled “Turf Analysis 1.2” which allows for batch analysis of digital images to calculate percent cover. In addition, the Dark Green Color Index (DGCI) was calculated for each plot based on the data collected through the image analysis process. Biomass wascollected monthly during the study to determine growth rate and samples were submitted for Total Kjeldahl Nitrogen (TKN) analysis to determine treatment effect on tissue nitrogen concentration.

Weather conditions during this study were wetter than average for August and drier than average for September and October (Figure 2). Overall July was wetter than average, but with the study starting at the end of the month the above average rainfall more than likely did not have an effect on the results. In the last few days of July the study area received 1.03” of rain and over the entire study period there was 16.19” of rain. Figures 3 and 4 show the daily high/low temperatures and historical average high/low temperatures for each month of the study.

The ProPEAT treatment did not produce an increase in visual quality when compared to the Polyon or Nutralene treatments.

The ProPEAT lb for lb treatment resulted in acceptable quality at day 70, however, it was significantly lower than all treatments except XCU and the untreated control after day 56. While the visual quality ratings for the ProPEAT lb for lb treatment were just below acceptable, that treatment was able to maintain similar quality levels as the XCU treatment with only having applied 0.6 lb of nitrogen 1000 sq ft compared to the 2 lb of nitrogen 1000 sq ft that was applied with all other treatments (Table 1).

There were minimal differences between treatments for the DGCI throughout the study (Table 3). Both the ProPEAT and ProPEAT lb for lb treatments resulted in lower DGCI than the Nutralene treatment, but was not significantly different than any other treatments.

The ProPEAT lb for lb treatment was able to maintain almost acceptable visual quality throughout the study and resulted in approximately 75% green cover up to 86 days after initial application. Considering the ProPEAT lb for lb treatment was only applied at 0.6 lb of nitrogen 1000 sq ft compared to the 2 lb of nitrogen 1000 sq ft that was applied with all other treatments, it was able to produce a turf response that exhibited minimal differences between other products in this study. This could partially be due to weather conditions which were nearly ideal and resulted in the turf being under very little stress, particularly in July and August. 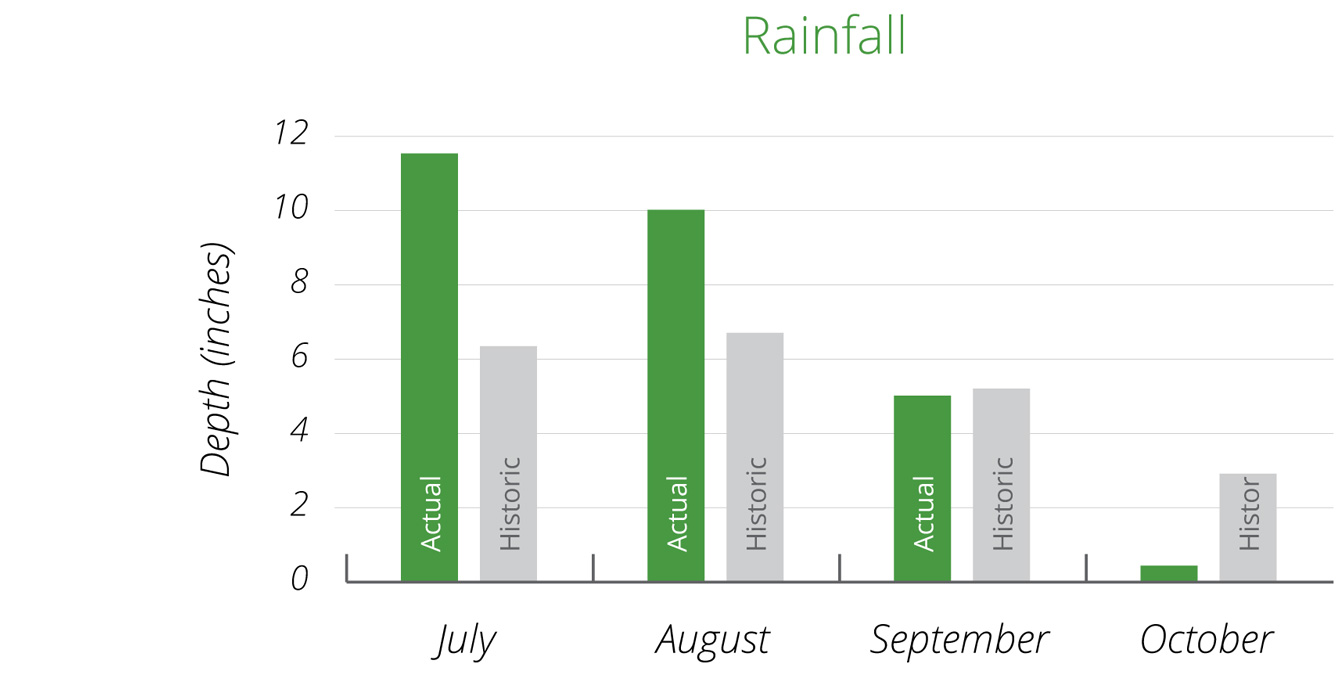 Percent green cover as determined through digital image analysis of photos taken from plots throughout the duration of the study. Values are presented by collection date.

Dark Green Color (DGCI) as determined through digital image analysis of photos taken from plots throughout the duration of the study. Values are presented by collection date.